It's quite possible I've sold more Alva 77's than any other single deck model over the last 10 years, and for good reason... It's one of the most iconic decks ever made. We have a bunch of new 70's re-issues dropping in August. Hit up your local shop and get them to lock an order in for one for you today.

We also have 3 new ALVA X POWER STATION wheels coming in with this drop in great complimentary colours to the decks. 58, 60 & 62mm. 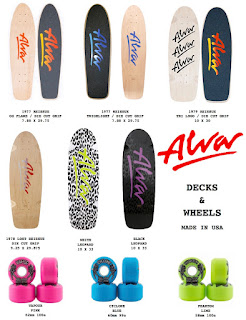 In 1977, at age 19, Tony Alva struck out on his own starting his skateboard company, Alva Skateboards. Alva’s company was the first owned and operated by a skateboarder as well as being one of the first to use layered maple plywood for the skate decks. Tony Alva was the first skateboarder to successfully market himself as a brand name; becoming the prototype for a modern professional skateboarder.

2016 see's ALVA SKATEBOARDS still kicking and screaming with a line up of quality USA made decks and wheels built to ride but also perfect for and highly demanded by collectors around the world. Every true skateboarder has at least one Alva deck in their quiver.
Posted by C FOUR INTERNATIONAL at 6:38 PM 1 comment:

Street Plant has found a new Aussie home with Goliath Industries and we have a bunch of new decks arriving August. 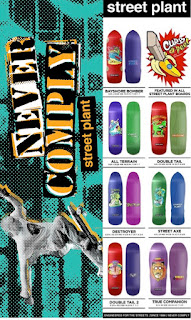 What goes around comes around... again. Mike V's not so new revised company STREET PLANT has found a new home at Goliath and is looking good.

All decks are pressed by PS STIX and graphics are hand screen printed. Great shapes and quality lumber genuinely rider tested and put through their paces. The shapes are really good, directional boards that ride like a regular modern board so you get the best of both worlds. Love or hate Mike V, he does a great job of putting a functional quality deck together.

Street Plant is a 100% independently owned and operated family business.
We exist to support, service, inspire and empower our customers – Skateboarders – The freest, most unique and creative people on the planet – By making the highest quality skateboards and skateboard accessories.

1. Love and Support Each Other.
2. Pursue our Work and Dreams with Purpose and Passion.
3. Do something Good with our Lives and our Time.

100% Independent Skateboarding for Love, for Fun.
No rules, no divisions, no schools.
Just a Skateboard as a Paintbrush and the World as an Empty Canvas.
Skate. Create. Enjoy!

Posted by C FOUR INTERNATIONAL at 6:31 PM No comments:

In an unusual move for Goliath, here is a second round of POCKET PISTOLS DECKS in as many months.

Stock is extremely limited so if you snooze you lose! Don't miss out.

POCKET PISTOLS - DEAD ROCKERS SERIES
It all started with the reissue of Jason Lee's graphic from the 90's in the BLAST FROM THE PAST SERIES. The deck features a tribute to David Bowie in his Aladdin Sane phase, then Mr Bowie upped and left us, making the Pedro reissue deck extremely sought after. Recent times have seen some of our most cherished and influential musicians and artists disappear and POCKET PISTOLS is paying tribute with a new full series of DEAD ROCKER TRIBUTE DECKS. You know the names and if you are a fan, grab em' quick. In true skateboarding plagiarism style, it's only a matter of time before we get a cease and desist letter. 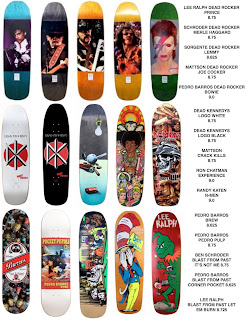 POCKET PISTOLS - BLAST FROM THE PAST SERIES

IT'S NOT ME : OOPS : LET EM' BURN : CHRISTO : CHATMAN EXPERIENCE

The Pocket Pistols team have been decked out with new models featuring a tribute to classic Rocco era graphics. Did you know? Screaming Squeegees who print all Pocket Pistols Decks actually printed the original Rocco company graphics back in the early 1990's! These represent period correct manufacturing and printing techniques on modern directional shaped decks.
They were built to be thrashed, but make perfect wall hangers and collectors items. 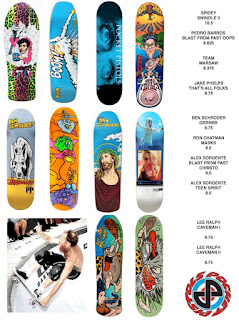 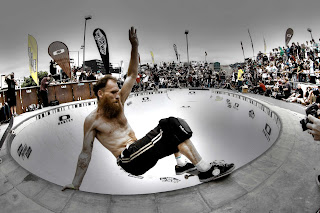 LEE F&%KING RALPH!
What? Your going to buy another boring McGill re-issue over these? You're a kook! 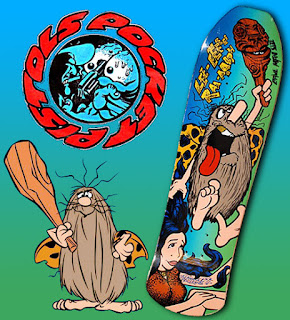 CAVEMAN 1 & 2 are back, LET EM BURN & DEAD ROCKER PRINCE for good measure. Do it!

We have a stack of other new Pistols decks coming for team riders BEN SCHRODER, ALEX SORGENTE, PEDRO BARROS, JAKE PHELPS, SPIDEY & MORE. Also just in are a black and a white version of the DEAD KENNEDYS decks.

Hit up your local Aussie skate shop and order today for July 2016 delivery. Hit reply or contact Goliath for more info.
Posted by C FOUR INTERNATIONAL at 7:11 PM No comments: