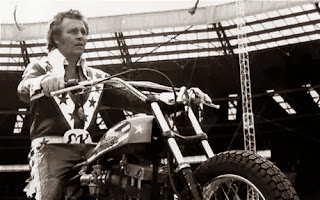 Maybe like me,  you had the IDEAL TOYS? I got the STUNT CYCLE for Christmas one year and couldn’t wait for next Christmas to put in my order with Santa for the
SCRAMBLE VAN. 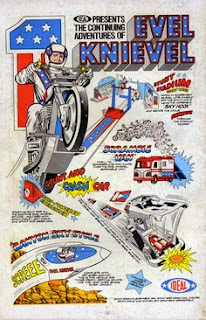 Maybe like me you grabbed a few bricks and some plywood and hit the makeshift ramp with your skateboard or BMX bike. Next I grabbed the saw horses to make a bigger jump ramp.

It was all about upping the ante and challenging yourself to go higher, further and faster. Pushing the limits like EVEL did with every stunt.
I guess MIKE V was under the spell of EVEL too.

It’s how all great skateboarders start out… first you learn to roll off the gutter, then a larger concrete block, pretty soon your are in search and destroy mode hunting out the highest loading dock you can get away with.

Hopefully you haven’t broken as many bones as Mr Knievel in the process? 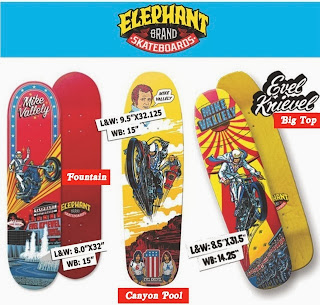 We’ve already arranged to park some stock for EVEL KNIEVEL fans and stores that want a hot ticket item this Christmas.

Don’t miss out on this one. Hit up your local store or Goliath today!

By the way, The FOUNTAIN deck is a nod to Evel’s infamous Caesars Palace Jump in Las Vegas New Years Eve 1967, where he broke no less than 40 BONES!!!

If you have never seen it… here’s the clip… not for the faint hearted!


Posted by C FOUR INTERNATIONAL at 4:11 PM No comments:

TOY MACHINE - ED TEMPLETON INTERVIEW... An oldie but a goody.

Here is an interview with Ed Templeton from 2011. I know it's a couple of years old now, but still a good read, check it out for an insight into what makes Ed tick. 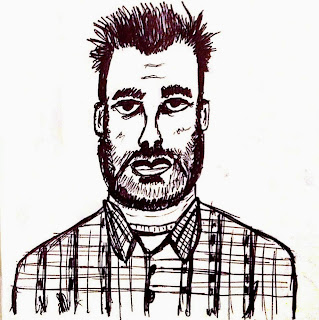 Posted by C FOUR INTERNATIONAL at 5:02 PM No comments:

October see's a whole swag of events sponsored by Goliath.

We're often asked to help out with events and try to pick the best grass roots ones to get behind with a little support. 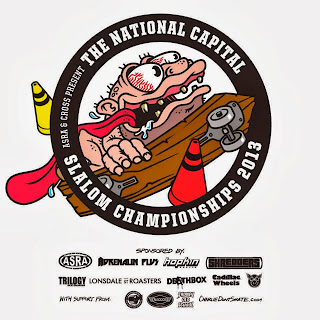 On the weekend the 2013 National Capital Slalom Championships Canberra went down.

Check out some of the action here!

Next weekend we have 2 killer events coming up, one in Sydney & one in Melbourne if you are traveling south.

In Melbourne the next MOSS event is taking place. I went to the one up in Newcastle a few weeks back and it's always fun, a jam followed by a charity auction. 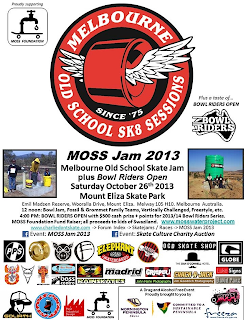 Goliath has donated some signed photos from legends like CHISTIAN HOSOI & DUANE PETERS. I missed out on this in Newcastle, but there is another FOUNDATION SWANK PUSH OLD SCHOOL DECK (see last post) signed by both
TOD SWANK & J. GRANT BRITTAIN
up for grabs. All proceeds from the auction go to:

These guys are doing some really good work for folks that don't have clean drinking water, something we all take for granted. Get down there if your in Melbourne and get something nice for the pool room and help out with some clean water in Swaziland.

Next cab off the rank in Sydney is the BoarderX Shakedown Series.
This is the first event of a series of 4. Centennial Park is the location on Saturday 26th October to kick things off, followed by events in Brisbane, Newcastle & Melbourne. 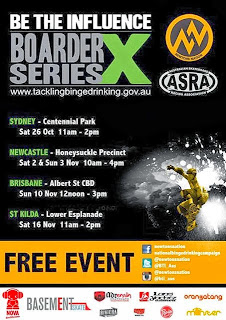 If you have seen Snowboard Boarder-cross... this is similar but on asphalt. Adam Luxford & Dave Robinson have designed and built a series of ramps and obstacles to hit after rolling in off the top of a shipping container! Entry is open to everyone and is FREE! Bring any board you like and have a crack.

If you want to keep up with all the other events Goliath is helping out with check out:

FOUNDATION SKATEBOARDS! There is some killer stuff on it's way

One thing I'm really excited to see are the J. Grant Brittain decks featuring his iconic black and white SWANK PUSH photograph. This is my all time favourite skateboard shot.

The story behind it is it was run as the cover shot of
TRANSWORLD SKATEBOARDING MAGAZINE in 1987. 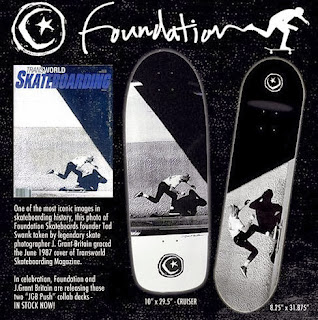 It was the first time they had steered away from the usual 'action shot' cover and people were up in arms. Is that a real 'trick' or something that anyone could do?

Either way its a beautiful shot with the diagonal shadow on the wall making for a perfect contrast cover shot that captures the soul of skateboarding.

Both adorned with this iconic image.

Skate em' if you want, but I think this one would look fantastic as a wall hanger! 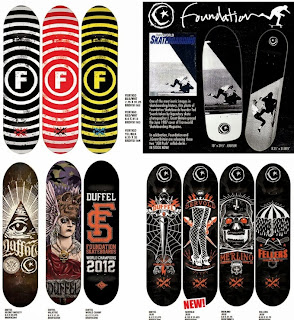 Also on this hit, new:

Look at these beauty's! America is obsessed with Gun Culture and here's Ed's take on the situation... 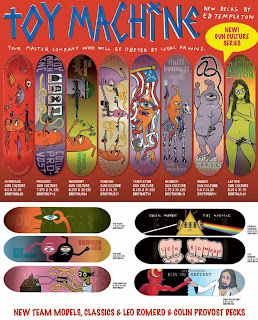 We also have some killer new team decks on the way along with a couple of one off's for Leo & Colin. Stock arrives first thing in November. Shops hit up Goliath... loyal pawns hit up your local store... don't blow it!

Posted by C FOUR INTERNATIONAL at 7:30 PM No comments:

Get off on the good foot... NEW DEKLINE MODLES available in Oz!

We have some great models in stock and ready for immediate delivery from the DEKLINE FALL 2013 RANGE.

We have backed up a little stock on these. CT SLIP is killer and becoming one of our best selling styles ever, a super comfy, durable, fully skateable slip on! Be quick though.

You can't go wrong with the KEATON, BENNETT & CLASSIC MASON either, great colours above and plenty more to choose from.
Want a sneak peek at what's going on with Dekline for 2014? What do you think of Dakota & Jaws getting pro models?
Check out this link here:
http://www.rippedlaces.com/2013/10/agenda-sneak-peek-dekline-sp14/

Posted by C FOUR INTERNATIONAL at 5:52 PM No comments: