I grew up in a part of Sydney that was fairly suburban, sprawling along the upper reaches of the lower North shore as one creative real estate agent once said. West Ryde, Melrose Park and Putney in the Ryde Municipality. It’s not really known for much blending into Sydney’s suburban sprawl.

If you are history buff, then it is one of the earliest settled areas of Sydney, the location of the first brewery and home of the Granny Smith apple. If you were to ask any Taxi driver, Top Ryde is pretty much the center of Sydney geographically, being the place it takes the most average time to get to any other part of Sydney from.


How not to get a skate park built in your area?

As a young skateboard enthusiast in the late 1980’s I began to write to the local council to secure some skateboard facilities for the area. Since the demise of the famous North Ryde Pacific Skatepark, nothing had been built in the area. We had to travel out to Five Dock, Keirle Park in Manly and other remote locations to get our skate park fix. I kept writing to the council regardless of just getting political goobblygook responses from the mayor and local councilors. It never really resulted in anything happening.

Writing to our to our local member, some bloke called John Howard, was the next step. I asked him to give the council a razz, but to no avail. I’m not really sure what ever happened to that guy, he didn’t seem capable of getting much done and I’m sure he never went onto bigger and better things? A couple of months later I did get a letter back from him and an apology phone call from a sheepish council employee. But still no skate park.

After I moved our of the area and years later a couple of small skate facilities were constructed in the area. One at Macquarie Park and joint venture with Hunters Hill council on Victoria Road at Gladesville. They were something, but fairly small and not of a scale or quality of may other parks being constructed around Australia. Nonetheless, they were something for the local skaters to ride and both are still frequently used and popular to this day.


A new push for a new Skate Park in Ryde!

A couple of years ago I noticed a Facebook page fire up called Skatepark for Ryde with a call to action to attend council meetings and give a push to have something bigger and better that a large municipal area like Ryde deserves to have constructed. So I got involved, after all it was unfinished business as far as I was concerned.

The page was set up by Ben Drayton and a few other local skateboarders who were also part of Ryde’s Skatepark Working Party.

After a meeting where Ben & Councillor Roy Maggio spoke enthusiastically I contacted them to see what I could do to get it over the line. I was invited to join the working group. The working group rallied the community and in July 2017 Ryde Council approved the design of the new skate park. 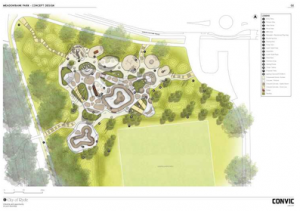 Where are we up to now?

When it comes to getting skateboard parks built, the wheels of progress turn fairly slowly and delays in construction are common place. But some great news this week, it’s all happening and it looks like sod will be turned in August 2018 with the project completed in March 2019. Convic have designed the park and also won the tender to get it constructed.

Below are two rednered drawing that represent pretty much what the final design will look like. As it’s a work in progress some change will be made due to construction and site conditions. I think it looks pretty good, let us know what you think? 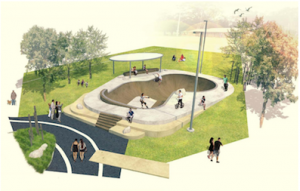 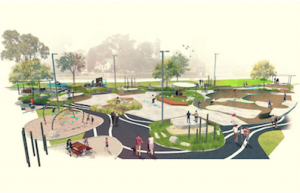 Below are details of the official community notification for the project.

In June 2017 Council endorsed the construction of the Meadowbank Park Outdoor Youth and Family Recreation Space at Meadowbank Park, Meadowbank NSW.
This new space will provide an area for youth of all ages and the rest of the family to socialise and play within our community. Council is now ready for construction, with the tender and final design now complete.
Starting from next week (week commencing Monday 30 July 2018) the area of works in Meadowbank Park will be fenced off as part of the setup process.

To receive updates on this project please subscribe to the online project page at www.ryde.nsw.gov.au/mpoyfrs
This article was originally written by me for the Basement Blog . Keep an eye out for further updates on this new park over the coming months.
Posted by C FOUR INTERNATIONAL at 6:16 PM